It is said that Wong Fei Hung formulated the tiger/crane fist set of Hung Gar as a tribute to Hung Hei Gung and Fong Wing Chun who lived during the Ching dynasty. This is their story.

After Gee Sin Sim See (an Abbot of the Shaolin temple) survived the destruction of the temple at the hands of the Ching armies Gee Sin started to teach patriots of the Ming dynasty. One of his most famed students was a tea merchant named Hung Hei Gung. Hung took his name from the first emperor of the Ming dynasty. He was a very powerful man and the tiger techniques of Abbot Gee Sin were well suited to Hung Hei Gung. Hung soon became noted for his fighting abilities. During his travels Hung met a woman, Fong Wing Chun. Fong had developed great skills with the movements of the crane.

According to legend, Fong was drying some rice in the sun when a crane came over and started to eat the rice. Fong tried to scare off the large bird with a stick. She soon found the bird was far too 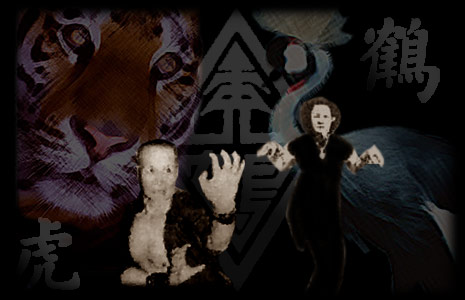 agile and evasive. Fong tried and tried but could not successfully strike the crane. Realizing the crane's abilities she began to study the crane's movements. Fong later developed her skills, fashioning it after the movements of the crane.

A very strong fighter killed her father and she knew that she could not defeat the killer of her father by herself. Fong Wing Chun had heard that Hung was a famous fighter in his own right, but convinced Hung that even though his skills were great, he could be an even greater fighter if he combined the techniques of the crane with the tiger techniques he had already perfected. Hung agreed, and trained for a number of years under the supervision of Fong Wing Chun. With time Hung became very skilled in the techniques of the crane. But Hung had to promise he would fight Fong's father's killer to avenge his death. Hung Hei Gung agreed and perfected the union of the tiger and crane. During this time love blossomed between the two. Hung later used these techniques to defeat Fong's father's killer. Hung Hei Gung had combined the hard, powerful techniques of the tiger with the soft, agile and evasive techniques of the crane.