The Chinese lion is the spirit and pride of the traditional Gung Fu school. The lion dance is a chinese folk tradition performed during holidays and important functions to dispell evil influences and hence make way for wealth and prosperity.

The famous chinese writing "The Romance of the Three Kingdoms" tells of four famous martial artists: Kwan Yu, Chang Fei, Lu Pei, and Loi Bo. It is these four characters the chinese lions are modeled after. Each has its own unique personality.

Nien and the Lion

Long ago a mean, strange creature appeared in China with a great hunger, eating both man and animal alike. This fierce creature was named "Nien" (or "Nian"), which somewhat sounds like the Chinese word for "year". Neither the tiger or the fox could fight the "Nien" so the people asked the Lion to help.

The Lion rushed at the "Nien" and with his great power wounded "Nien". With his tail between his legs "Nien" ran off. Nien vowed to return to take revenge someday.

The next year he did return. But the Lion was nowhere to be found. He was off guarding the Emperor's gateway. So the people of the village decided they had to do it themselves. Out of cloth and Rattan they made a creature that looked somewhat like a Lion. Two villagers got inside it and tried to make the creature come to life as they approached the Nien. The Nien was frightened by this strange looking Lion and fled.

So to this day on the eve of Chinese New Year, Lions dance to frighten off evil and bring in good luck for yet another year.

It is said a long time ago in a village in China that a Lion was stalking the people of the village.

The villagers were very afraid and would not come out of their homes, so the village was falling apart. The leader of the village sent word to the Buddhist temple that they needed help.

The temple sent a monk to tame the lion and make him a guardian of the village. That is why you see a Dai Fut dancing with the lion, he is the guardian or keeper of the lion.

It is said that the Sing Si or Lion Dance originated during the Tang dynasty (618-907 AD). The story goes that the Emperor of that time had a dream, and saw a strange creature that in the dream had saved his life. The next day the emperor described his dream in detail to his ministers. One of them told the emperor the animal which he had described sound like an animal found in the west called a lion. 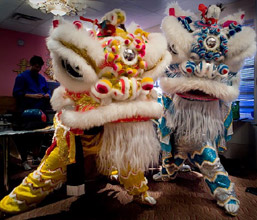 Because this creature saved his life in the dream the emperor thought this creature brought good luck and now is the symbol of good luck throughout China and is performed on the lunar new year, as well as opening ceremonies of new businesses and special events throughtout the year.

A Lion Dance troup is made up of a drummer, a gong player and as many as four cymbal players (various sized cymbals), a dancer in the head and one in the tail.

Classes in tradtional Chinese lion dancing are offered to students at the Canadian Hung Kuen Kung Fu School. The classes give the students the opportunity to learn Chinese cutlural traditions, classic Chinese musical instruments, and different dynamic lion dance programs. Students get the opportunity to participate in performances and with time they learn all aspects of traditional Chinese lion dancing.

Our lion dance teams have performed for many various events in Regina and area, including performing for former Prime Minister Joe Clark, when he visited the Queen city. We have also performed in New York City, Los Angeles and various cities in Europe. A lion dance adds color and excitement to any event, as well as good luck and prosperity.

The lion dance teams at the Canadian Hung Kuen Kung Fu School are available for various events in Regina and area.

To book a lion dance, just send us an email.