Born To Be A Legend

Wong Fei Hung without a doubt is the most famous martial artist of all time. His life has been portrayed in over a hundred movies, by such actors/martial artists as Kwan Tak Hing, Jackie Chan and Jet Li. The real Wong Fei Hung was born in 1850 in Gwan Dong, Lam Hoi province, Sai Chu County, Luk Huern Yan village in China.

He was born into a legendary family (Wong Tai his grandfather and Wong Kay Ying his father). Young Wong Fei Hung began his training at age five and by the age of thirteen was already a very accomplished martial artist and traveled with his father demonstrating his skills. It is said that Wong's skill in Ng Loong Bat Gwan Gwun was second to none. Wong Fei Hung was a great fighter even at a young age. 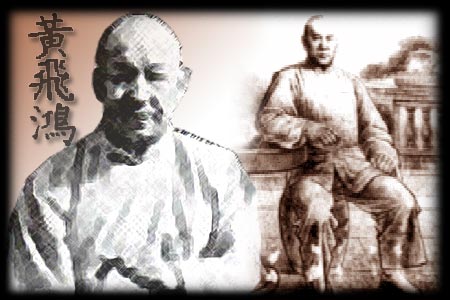 Horse and Bridge hands and combined it with his fighting skills. Using "Sup Juet Sao" (Ten Killing Hands), and "Gau Duk Kuen" (Nine Special Fists) to develop both the tiger/crane set and the two partner tiger/crane set or Doy Dar.

During Wong's lifetime he had married four times. Wong's first wife's surname was "Law". She passed away from an illness, only three months after they were married. His second wife's surname was "Ma" and bore Wong two sons - Hawn sum and Hawn Lum. She died soon after. Wong Fei Hung's third wife also bore him two sons - Hawn Hei and Hawn Hsu. But his third wife also passed away not long after. By this time Wong was said to be bad luck for any woman he married. He stopped trying to remarry at this point, although later Wong was to marry for the fourth time to Mok Gwai Lan who did outlive him.

At the end of the Ching Dynasty and founding of the Republic in 1912, Wong Fei Hung became head instructor of martial arts for the special elite military unit under the direction of General Lau Wing Fuk in Canton city. In 1924 there was a strike against the government by all the businessess, Canton City fell and Wong's home and herbal shop were burned to the ground. Wong lost everything, all his belongings and money.

Not long after, Wong Fei Hung's son Wong Hawn Sum lost his life, shot dead by a drug gang. After all this Wong took ill and passed away in his home at the age of 83 in 1933. His fourth wife Mok Gwai Lan moved their sons to Hong Kong. She established a school there and produced many great students.

Although this is just a quick summary of Wong Fei Hung's life, it displays his famous martial skills and touches on this truly great martial artists and man.