A Piece of Wong Tai's Life

Wong Tai lived in Nanhai, Kwandong province. His skills in both bone setting and especially herbal medicine was well known and he was one of five popular doctors in Kwandong province at the time.

His main skills were in his medical practice, however it is said he was well versed in the Ng Ying Kuen (five form fist). It is also said he was well learnt in the skills of Moi Fa Jam (plum flower needles) and also the skills of Monk Feng I Yuans' Sam Luk Da Rue (Feng I Yuans 36 vital strikes) and also MonkWang Cheng Nan Da Rue. Monk Feng I Yaun's skills were from Taoism and designed in the early Ming dynasty while Wang Cheng Nan skills where developed later in the Ming dynasty and were learnt in the Sil Lum Gee of Southern China. 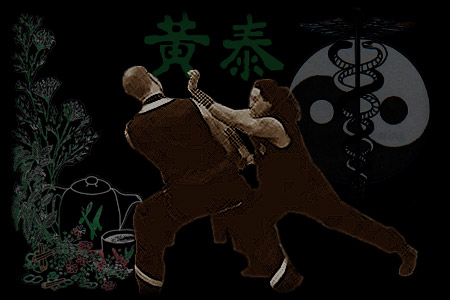 Wong Tai furthered his learning of Gung Fu through his meeting with Hung Hei Gung, which was a short time and learnt further his martial skills through Luk Ah Choi.

It is said that Wong Tai was one of Luk Ah Choi's most favored friends and followers, and although they were of similar age, and Luk Ah Choi was senior, the friendship outweighed the more traditional teacher/student relationship.

Through Luk Ah Choi, Wong Tai would learn in particular the Fa Kuen skill, and expand his knowledge on the Ng Ying through both Luk Ah Choi and Hung Hei Gung.

It is also said Wong Tai refused to let his son be taught by Luk Ah Choi due to the climate of the time, and he worried that his son would be in danger from the Ching army if he was found to be in league with the compatriots.

It was for this reason Wong Tai put all his efforts in teaching his son medical skills and through this Wong Kay Ying would become known as one of the six most skilled doctors in Fut Shan - Kuan Chin Chih, Li Tsai Kan, Liang Tsai Hsin and Juan Shi being the other five.

There is no written history on when Wong Tai passed away but it is believed he died in his place of birth and also around the time of Luk Ah Choi's death.