Lam Tsai Wing was born in 1861 in Gwan Dong Nam Hoi, district of Kwangtung Province. He began his training in Martial Arts at a young age, first learning from his Grandfather, Lam Bak Sin and also Hung Kuen from Wu Gum Sin, as well as Budda's palm Kung Fu from Jung Hon San. He also learned Iron Wire form from Lam Fook Sing (Tid Kiu Sam's disciple), and later became a disciple of Wong Fei Hung, who he would train under for 20 years. Grandmaster Lam combined all his knowledge of Southern Kung Fu into one style and called it "Fu Hok Pai" (Tiger & Crane Style). His nickname became Mr. Tiger & Crane.

Grandmaster Lam Tsai Wing was a pork butcher by profession and his favorite weapon was the Darn Do or broadsword. His skills were well known across all of Southern China and earned him the name "Magnificent Butcher". Lam Tsai Wing was the most important figure in modern Hung Gar development, more then any other Hung master. He spread Hung Gar and popularized it with his progressive thinking and personal training methods. In 1917 Lam Tsai Wing and his student Gi Yee Jai Jeung Si Biu and Lei Sai Fai, wrote three books on Hung Kuen (Gung Gee Fook Fu Kuen, Fu Hok Sheung Ying Kuen, and Tid Sin Kuen) which remain to this day in print. These books were the first to depict actual Hung Gar or any Southern Kung Fu to the general public. Hung Players now had a concrete reference point.

These books opened the door to the world to Southern Kung Fu. This started a trend among other masters of different styles. Lam's efforts were met with great disapproval at first from other members of the Chinese community. Lam Tsai Wing, it seemed, did many radical things in which he preserved Hung Gar. He systemized, reorganized, and refined the Hung System to what it is today. His work has not been in vain. It is one of the most highly respected styles of Kung Fu in the world. 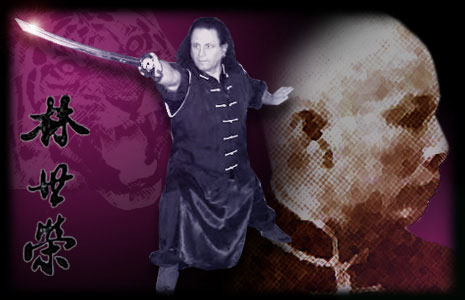 There is a famous story told about Lam Tsai Wing's skills, which is still told today. One day Wong Fei Hung asked Lam Tsai Wing to accompany him to the Hoi Tung Gi (Hoi Tung Temple) to discuss a matter with the Abbotmonk. At the temple they were met by someone who was known as the iron head monk, who told them the chief Abbot wasn't available, and instead offered them tea. While waiting the iron head monk boasted of how he could never be beaten or touched in any way in a fight.

Another story told of a man named Loi Long Sau who was well known for selling medicine and demonstrating his Kung Fu skills on street corners. Someone had asked him what he thought of Master Lam Tsai Wings Martial skill, Loi replied that he thought Lam's skill was poor. Some of Lam Tsai Wings students overheard Loi's claim. The word of Loi Long Sau's claims got back to Master Lam. Lam was angry to hear this. Master Lam went out to confront Loi about what he had said, but found only one of Loi's students tending the medicine stand. The student was very scared when he saw Lam Tsai Wing. Lam asked where his Sifu was. The student told him that his Sifu was taking tea across the street. Master Lam took a thick cowhide that was hanging to dry that was to be used for a drumhead and with such a feet of strength tore it in half. Upon seeing this Master Loi ran across the street to confront Lam Tsai Wing. Loi took a swing at Master Lam. Lam Tsai Wing blocked the punch with a powerful Kiu Sao (Bridge hand) then retaliated with a strike of his own landing lightly on Lei's forehead. Loi feeling ashamed fell to the ground pretending to be badly hurt. Lam Tsai Wing knew Loi Long Sau was just pretending and that he was not really hurt at all. Loi proceeded to use a tiger tail kick from the ground. Master Lam jumped back into an empty stance. Then Loi rolled over and through a round kick. Lam Tsai Wing caught his leg and with a swift powerful blow, broke Lei Long Sau's leg. Months later Lei recovered and went back to selling his Dit Da medicine and performing his Kung Fu. He told everyone, look the famous Lam Tsai Wing broke my leg, but my medicine is so good that it healed my leg completely, my medicine is the best!

In the late Ching dynasty, Lam traveled to Canton to enter a tournament held at Dum Gao Cheung stadium and placed 1st over all with his Hung skills. Lam Tsai Wing was appointed head instructor for the New Republic Chinese Army in Canton and was commissioned to teach the Calvary military European Saber to the officers in the Army. Grandmaster Lam created a set the "Soldier's Saber Set" to be used with this new foreign weapon based on his well-respected sword skills. This very unusual weapon set has become part of the Lam Tsai Wing curriculum to this day. When he retired due to old age, he was invited to Hong Kong to settle in the colony. He accepted the offer and taught there until the 1940s. Lam Tsai Wing passed away in his hometown in 1942 at the age of 81. His legacy lives on through the many disciple of his lineage.