Legend In His Time

In the 1930's Kwan organized the theatre troupe which entertained the front line troupes during the fiercest period of the Sino - Japanese war, much like Bob Hope did for the American soldiers during the war. However, during that time Kwan had a bounty on his head. The Japanese offered 40 000 dollars for his capture. Rather than hide from the mounting Japanese presence, Kwan kept performing with his troopes, raising the spirits of the Chinese. 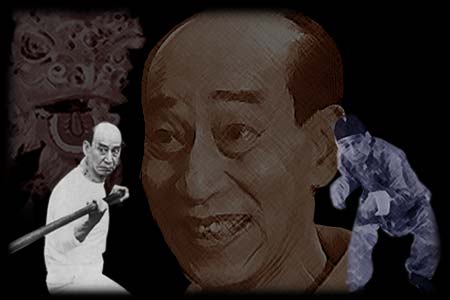 Years later Kwan would become "Wong Fei Hung" to countless many through his portrayal of the great Hung Gar hero. For thirty years Kwan played Grandmaster Wong in over one hundred movies and many episodes on television. So convincing was his portrayal that Kwan was seldom called by his real name, but was known to many as Wong Fei Hung. He was also known as a very skilled lion dancer. Because of his acting abilities he recreated breathtaking lion dance performances. He was also well skilled in Hung Gar and was famous for his performances in such sets as Tid Sin Kuen (Iron Wire Fist) Hung Ng Ying Kuen (Five Animal Fist) and Fuhok Sheung Ying Kuen (Tiger-Crane Fist).

Grandmaster Kwan Tak Hing was as apt at Kung Fu as he was at acting. He practiced the ten forms (Snake, Dragon, Leopard, Tiger, Crane, Lion, Elephant, Monkey, Bear and Horse). Gong Yau Kuen has over a thousand movements ranging from flexibility to forcefulness.

Despite Kwan Tak Hing's success as an actor and martial artist only Chinese traditionalists know of his many accomplishments. Kwan was a living embodiment of the great Wong Fei Hung and was genuinely a Master of Kung Fu such as Hung Gar, White Crane and also developed his own style. Although Grandmaster Kwan Tak Hing is no longer with us, his legacy lives on through his role as Wong Fei Hung and his contribution to Kung Fu. He was truly one of Hung Gar's legends.