In China the name Shaolin Pugilism and staff techniques are renowned and well versed in history and poetry.

Towards the end of the Ching Dynasty, great writers of poetry and of chivalry, blended with the folk lore of the time wrote many novels of heroic figures of Shaolin Pugilism.

One of the most influential novels of the time "Emperor Chien Lung's tour to the south of the Yangtze river" brought many mystical and powerful figures to life far beyond the scope of the oridinary man, and from these novels history blended with fiction to bring Shaolin Pugilism to the history that it is today. 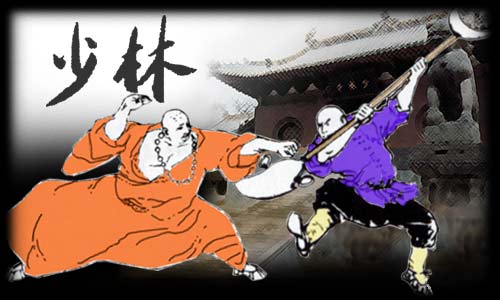 The monastery is not very large, and cannot be compared to the four precious temples of Buddhism, those being Mount Puto in Tinghai County, Chekiang Province, Mount Emei in Szechuan Province, Mount Chiuhua in Anhwei Province, and Wutai Mountain in Shansi Province.

Even the sacred temple of Mount Tai-shih of Sunghan is of more beauty, and elegant.

The Shaolin Monastery was a hive of activity both from monks and secular monks of the Ming Period.

It is said at this time, harsh laws where enforced by which bandits and thieves where executed immediatly by beheading for any indiscretions they did.

To save themselves, these brigands would shave their heads, put on robes, and remitt their ways. These men did nothing in the monastery but practice the arts of pugilism and staff techniques. However after many years they too became masters of their arts.

Emperor Chung Cheng, hung himself at the foot of Mei-shan just out of the northern gate of his palace in Peking (Beijing) before the Manchus overran the whole of China and established their Dynasty known as the Ching Dynasty.

Of the imperial family of the Ming Dynasty was Chu Te-chou who took refuge in the Shaolin Temple. Chu Te-chou buddhist name was Tung Chan Sim Si.

The Manchus, who practiced Buddhism, not only protected the monastery, but also bequeathed large amounts of gifts on it. It is for this reason that some monks betrayed Chu Te-chou and the other patriotic warriors to the Manchus.

Chu Te-chou left the Shaolin Monastery before the fateful days the Ching's attacked the Monastery. Chu Te-chou took his guards to the south and established their base on Mount Chiulin(Gaulin) at the borders of Kwangtung, Kiangsi , and Fukein Provinces.

To conceal their activities and their intention for rebellion, the stronghold was built in the same manner as the Buddhist Monasteries, and the soldiers dressed in the manner of monks.

Those that trained at this stronghold where sent to the four provinces Kwantung, Kwangsi, Hunan and Fukien.

It is from this history that the development of the great five elders of the Shaolin Temple went to the Sil Lum Temple, and from here developed the pugilism of the south.

Shaolin monks followed many concepts and developments many years before the burning of the temple. Due to these formations such as Wu Shing, Chi Mon Pat, Yat Chi Cheung Chea and Pai Chui, they made the monks very formidable towards large armies that attacked them.

It was these formations that held off the Chings, but only through the weakness of Shaolin monks fighting with the Chings assisted with the overthrow of the Shaolin Temple.

When Chu Te-chou became more powerful within the Sil Lum Temple, he sent five monks to do infiltration work amongst the Chings.

These five where also the founders of the secret organization "HUNG" gang. They migrated everywhere and used different Buddhist names to conceal themselves from the Manchu officials. their Buddhist names were:

It is from Gee Sin Sim See that Hung Gar Kuen (Hung Pugilism), was founded, and from the history of his time that brought the creation of a style that has direct lineage to the reknowned temples of the Northern Shaolin Monastery, and that of the fighting temple of Sil Lum Temple.