Hung Gar Gung Fu is one of the more popular styles of Chinese Gung Fu, and the style is so immersed in China's culture and history that it will always be remembered. Many of China's legendary heroes practiced Hung Gar Gung Fu. It's virtues and ideas are still reflected in today's world, never to be forgotten. People such as Wong fei Hung, Fong Sai Yuk, Tang Fung, and Lam Tsai Wing contributed to making the style what it is today.

Hung Gar Gung Fu is a style that was developed at the Sil Lum (Shaolin) Temple. It was founded by a man named Hung Hei Gung. 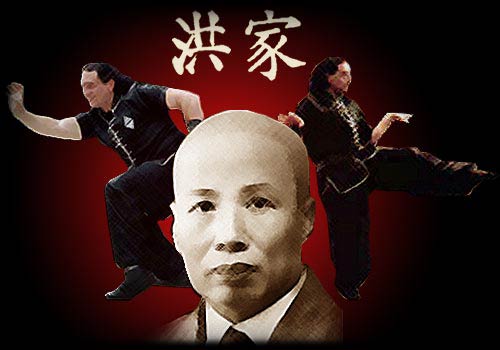 His real surname was Jyu, and he made his living as a traveling tea merchant. One day while traveling, he was confronted by some Ching nobles, who started a fight with him (The Ching dynasty was established in 1644 and lasted until 1911, a powerfully oppressive government that crushed the Ming dynastyand caused great turmoil in China). After this incident, Jyu was a wanted man with a price on his head, so he fled to the Sil Lum temple to train as a layman. The Sil Lum temple was known for producing amazing Gung Fu fighters through their extremely hard training at the temple. When Jyu arrived he was taught under the main Headmaster at the temple, a man named Gee Sin Sim See. Gee Sin's expertise was the Tiger, and he took student Jyu as one of his special disciples.

Jyu trained under Gee Sin Sim See for many years. He worked closely with Hung and helped him to develop the Tiger system. It is said by some Hung Gar practitioners that Gee Sin Sim See was the creator of the Hung style, but this can be argued. Gee Sin Sim See is also noted for helping spread the art of Hung Gar throughout southern China. The training that Jyu endured was incredible, and he was one of the most powerful monks at the temple. Jyu's size and strength well suited the powerful Tiger techniques that Gee Sin taught him. Jyu's relentless attitude to better himself and others was quickly noticed by everyone around him. He was a proud man with strong virtues, and he had a great desire to show others the skill that he had attained. He studied at the temple for many years, until it was attacked by the oppressive Ching government. The Ching -- or Manchu -- government's attack on the temple was fierce. They wanted Gung Fu suppressed because it gave individual people thoughts, rights, and the power to enforce them. The Ching army marched inside the temple and tried to burn it to the ground. They succeeded in destroying the temple, and killing most of its residents, possibly including Gee Sin Sim See, but Gung Fu survived.

Legend has it that five monks survived the attack on the Sil Lum (Shaolin) Temple. Gee Sin Sim See was said to have fled southward into Kwangtung Province (Southern China), taking employment as a chef at an Opera house. The Opera house served as a excellent cover for Gee Sin Sim See to teach his art to drama actors and other militant patriots that he came in contact with.

Jyu escaped death at the temple, afterwards changing his name and his purpose in life. He changed his name to Hung Hei Gung, and his purpose in life to restoring the Ming dynasty and crushing the Chings. The name change did not represent the style that he would later create, but rather paid tribute to a man he believed in -- Hung Moi Chui, leader of the Ming Dynasty. The Ming Dynasty was a particularly prosperous dynasty that encouraged Gung Fu and was interested in preserving the practices and religions of ancient China.

It is said that while on his travels, Hung Hei Gung met another traveling performer -- the lovely Crane Boxer, Fong Wing Chun -- not to be confused with Yim Wing Chun, the founder of Wing Chun/Tsun Gung Fu. It is also said that Fong Wing Chun was the niece of Fong Sai Yuk, though other sources say she was Fong Sai Yuk's daughter. Some accounts say Fong Wing Chun learned her Crane style from Fong Sai Yuk, while other sources indicate that she learned the style from a woman hermit named Mg Mui. At any rate, Fong Wing Chun began the task of getting revenge for the murder of her entire family at the hands of some members of the Wu Tang clique (Pak Mei and his student Lee Pak Shan, among others). Hung Hei Gung, a compatriot and training brother of Fong Sai Yuk, avenged Fong's death by killing some of these same members and later married Fong Wing Chun. Hung Hei Gung further refined his style after his marriage to Fong by amalgamating, or joining, the two animals Fu & Hok (Tiger and Crane) styles together as one.

This system relates to Yin and Yang, a balance duality, in that it contains hard pounding techniques, and soft elusive movements. It also contains the five elements:

Although the main focus is on the Tiger and the Crane, these other techniques are there to make Hung Gar a more balanced style. It became a style that focused on personal physical, mental, and spiritual development, a style that represents the Ming Dynasty and it's virtues. That dream shall forever be remembered in the hearts of all Hung Gar practitioners.