There are many tales of Wong Fei Hung's exploits. One of the most celebrated tells of his victory over prejudices.

One day a foreigner posted a notice to all Chinese, an open challenge that his vicious dog could defeat any Chinese man with ease! This dog was huge - the size of a tiger. At the time, foreigners labeled the Chinese as "The dog of the East". Therefore, if the dog defeated a Chinese man, he would be viewed as less than a dog. Wong Fei Hung heard of this notice and took the challenge to defend the honor of his people. The dog was very vicious and had mauled many that had taken the challenge in the past. Wong Fei Hung faced the dog knowing his race's honor was at stake. The dog immediately jumped at Master Wong, the Master sidestepped and wrapped his left hand in a cloth, while positioning himself. It appeared as if he was retreating? 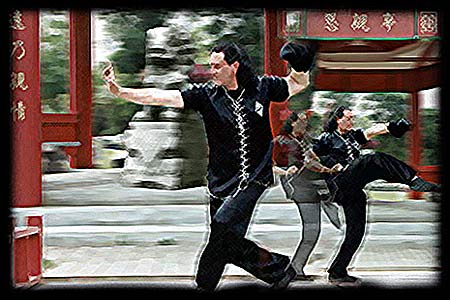 But master Wong was really setting the dog up for his famous Mo Ying Geuk (shadowless kick). Master Wong held his left hand over his head to tease the dog. The dog jumped at him once more. But this time the dog was met with a series of deadly blows that struck the dog's groin and nose, killing it instantly. The crowd went wild as the dog fell heavily to the ground.

Kick Like The Shadow of The Moon is what it became known as in legend. This famous technique embodied and will always be enshrined in the famous set Fuhok Sheung Ying Kuen - The Tiger/Crane Double Fist Pattern.

Wong Fei Hung had proven that indeed he was of a proud race of people.